In the traces of river Aggiti.

The river Aggitis has its spring at the small village Aggitis, northwest of Dráma, at the foot of a marble mountain, belonging to the Rodopen mountain range. The marble is quarried all around. The river runs south through a wide valley and enters a gorge near Alistrati. Then it runs again through a wide valley where it meets the river Strimonas, which flows into the Mediterranean sea soon after at Amfipoli.
The sources of the river were used by the inhabitants for water supply and as a source of power. They built water mills right at and below the spring. Soon they discovered the first big hall, which has a big opening to the surface, a doline where the roof caved in. It is also accessible from the cave entrance, but the ceiling is very low.
The first recorded visit of the cave was made by the French consul at Thessaloniki, Esprit-Marie Cousinéry, who travelled around Macedonia for 40 years. After his retirement, he wrote a book about the area, in which he describes his cave visit (see bibliography above). His visit happened at the end of the 18th century, and he visited only the first hall. He named this hall Nymphaion, as he thought this was a place of worship for water gods.

The huge first hall was used in the 19th century to install a water wheel, which pumped water up into a water pipe. At this time the first short tunnel was built to access the first hall. The water was drinking water for the town and irrigation water for the nearby tobacco fields. There was a six kilometre long channel, which was also built at this time.
Then in 1952 the new Hellenic Speleologic Society made the first exploration, but a siphon stopped any research after only 70m.
In 1978, with much better equipment, a group of French and Greek speleologists made a new attempt to explore the cave behind the siphon. They discovered a passage of 500m which again ended at a siphon. This part of the cave is today’s show cave. Soon a second short tunnel was built to allow people to pass the first siphon.
Anna Petrocheilou, who was president of the Hellenistic Speleological Society at this time, suggested the cave to be developed as a show cave. But it seems the cave fell into a sort of sleep, as it took until the year 2000, when the cave was finally opened to the public.
Today, a new entrance tunnel allows comfortable access to the main passage and enters the cave at the so called Beach Chamber. The path, built on a bridge above the river, shows the section to the next siphon, and the visitors have to walk back the same path to the Beach Chamber. Here a bridge crosses the river and a short tunnel leads to a narrow section of the cave, and another tunnel leads to the entrance hall. The water wheel, the huge doline and a small chapel are the highlights at the end of the tour.

At the new tunnel, todays entrance tunnel, an archaeological excavation is visible. It revealed numerous Stone Age remains. But this was not the place were the hunters lived. The place was a small depression and the water of the river transported material into the depression where it accumulated. 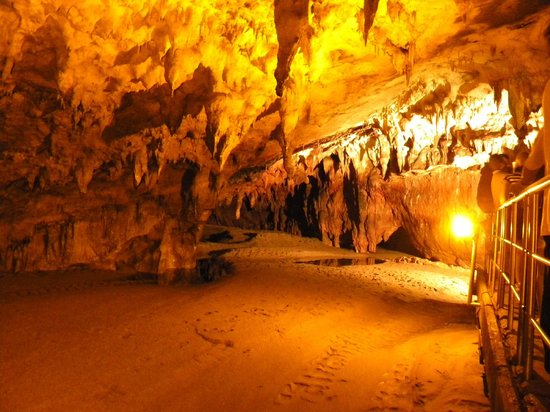 The riνer Angitis is a main element in the hydrographic network of the lowlands of Drama. It starts at the Maara springs, crosses the western side of the low-lands and having collected its waters at Philippi pours into the Strymon river. 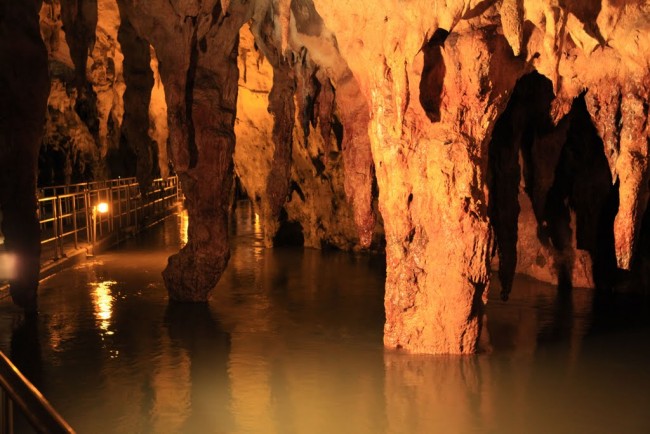 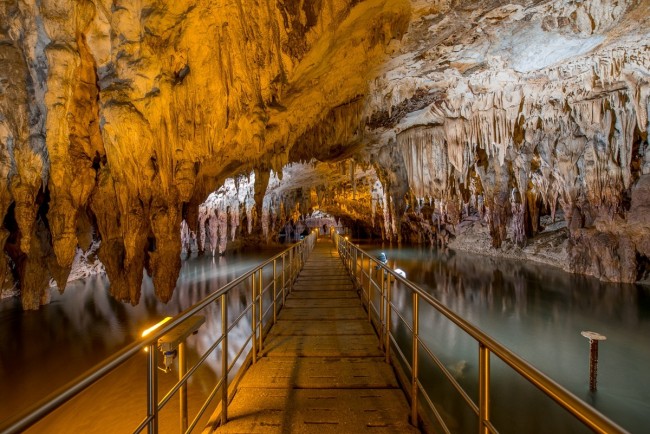 The space is impressive in Cave and visitor, as he moves in a corridor over the river and against to the flow of water, monitors the natural decoration in the Cave which is dominated by white and red stalactites of various forms

Greek histori is unique and the Cave is awesome.

The combinationof the river and the Cave looks wonderful. Take a jacket with you!